Though I had planned not to share any shot maps before I had discussed the concept of Expected Goals and my model properly first, after watching last night’s game between Norrköping and Djurgården I just couldn’t help myself. Now some of you probably have seen this kind of plot before so I will leave out the explanation for later posts. 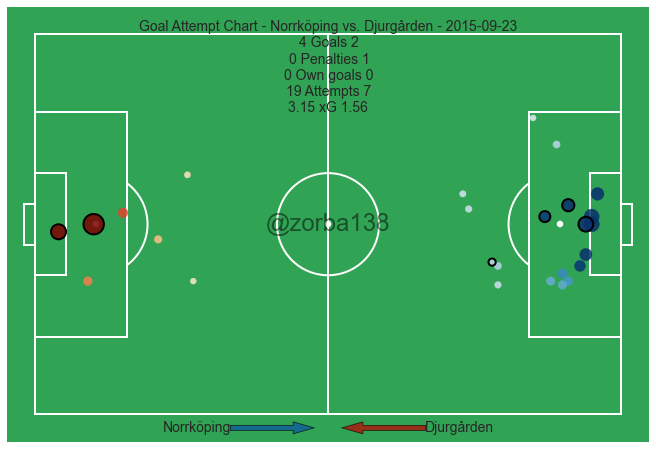 Here’s last night’s high-scoring game. Being a lifelong Djurgården supporter this was not a pleasant game to watch, and to add to the pain I actually had a bet on the under here. Sigh.

While I don’t believe much in year to year trends such as Team A vs. Team B always produces a lot of goals in today’s modern football where players and managers change teams frequently, watching the game I got a vague feeling of déjà vu and just had to look up this fixture from the last few years.

Looking at the games from seasons 2014 and 2013, it seemed there is some truth to the myth. But while it may look like this particular fixture usually end up a high scoring affair, in the other seasons in my database (2011 and 2012), the games ended 2-1 and 1-1 respectively. Furthermore, Djurgården actually only had two players starting in all three games: Kenneth Høie and Emil Bergström. The same goes for Norrköping with only David Mitov Nilsson and Andreas Johansson starting all three games.

With so few players playing all three games and the games therefore being played under completely different preconditions, I think we can safely put this high-scoring trend down to pure coincidence. I still feel like a fool for betting the under though.