Now that we’ve explored the Expected Goals concept and the data available for Swedish football, it’s finally time to build the model and put it to the test.

I’ve chosen a number of variables which all in some way make sense to test in the model. They include: 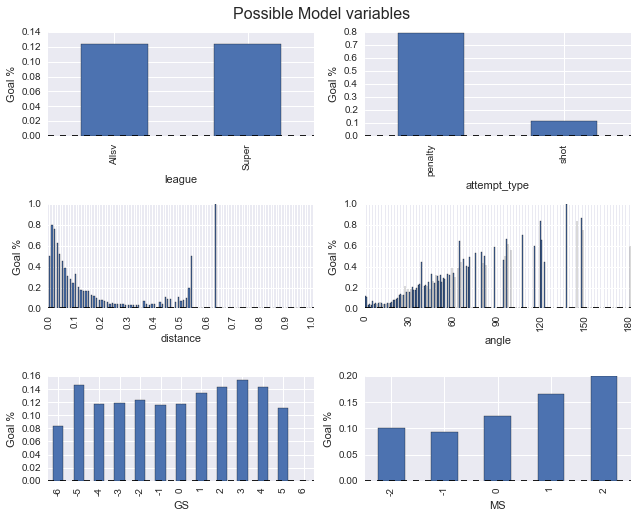 Let’s take look at the individual goal expectancy for the variables. Goal expectancy for the two leagues is very similar but could possibly be of use if they interact with the other variables differently. Attempt type is pretty obvious with penalties having higher value than regular shots. In the graphs showing distance and angle the values have been rounded off for presentation, while higher precision is used in the model. There is some outliers here due to small sample size at the higher values but the patterns seems clear. It’s hard to tell from the graph if Game State is of any use since there isn’t much difference between the levels. But Man Strength shows a clear pattern, it certainly looks like goal expectancy rises when having more players on the pitch.

So let’s throw the training dataset (seasons 2011-2014) into a logistic model and have a look at a summary of the results: 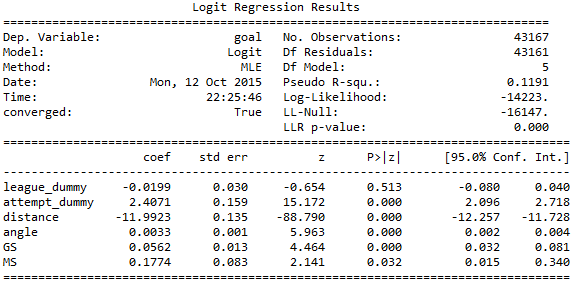 There’s a lot of numbers here but let’s just focus on the p-values for each variable. Every variable is significant at the 95% significance level (p<0.05) except league. As expected from the plot above, there’s apperently no use to separate Allsvenskan and Superettan shots. Here’s how the model summary looks without the league variable:

So, with only significant variables left in the model, how does it perform when compared to actual goals? I’ve had the model calculate total xG for each player in Allsvenskan and Superettan for our test season (2015), and plotted this against their actual goals scored the same season. 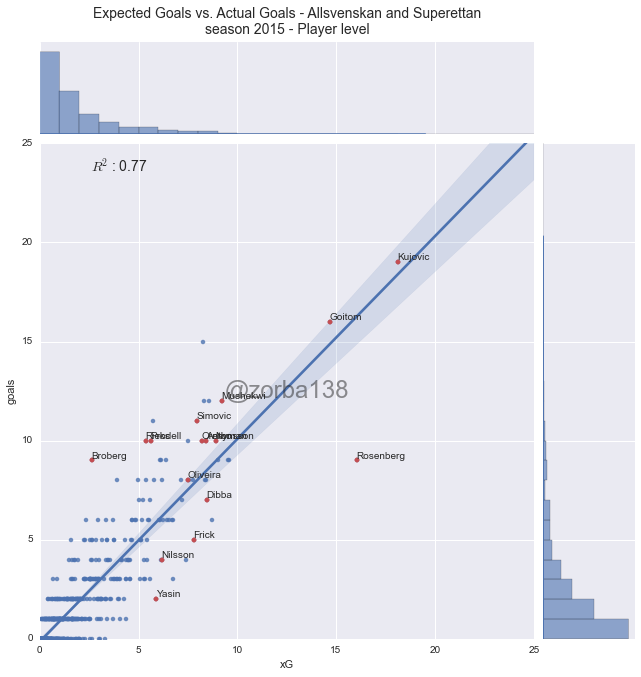 With an r-squared of 0.77 I’d say the model is performing pretty well. Whats more encouraging is that the slope of the fitted line seems to be very close to 1, meaning that 1 expected goal is pretty much equal to 1 actual goal scored. 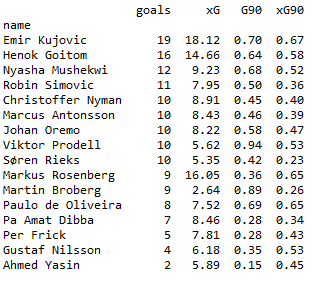 In the graph I’ve also plotted the players in the top 10 in either goals scored, xG, goals per 90 or xG per 90 for the season. Some of them have good numbers in several of the stats. Emir Kujovic and Henok Goitom for example are performing outstanding this season, both being crucial to their respective teams run at the title. Markus Rosenberg on the other hand is underperforming with only 9 goals scored compared to his 16 expected goals, which is one of the reasons why Malmö are not living up to the expectations this season. Örebro’s Broberg and Häcken’s Paulinho de Oliveira also make the list due to their great form in the recent months while Djurgården’s Mushekwi enjoyed a good goalscoring run in the first half of the season.

Let’s take a look at how the model perform on a team level:

On a team level, it looks like the model is performing better when it comes to xG against than for, but overall it is a reasonably good fit, although not as good as at player level.

As we can see the top teams are all performing well offensively. Göteborg stand out defensively with only 17 goals against in 27 games, even outperforming their excellent xG against at about 24. On the other end of the scale, Halmstad’s attack is underperforming with only 18 goals compared to over 35 xG. 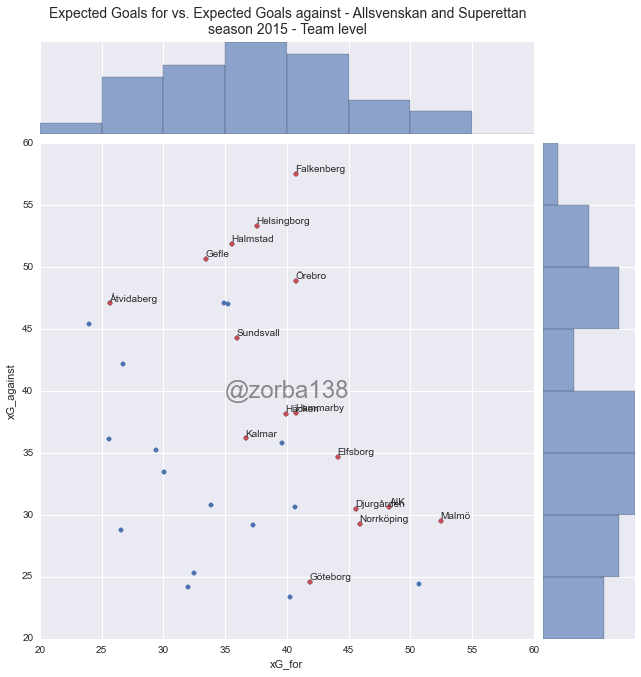 That’s it for now when it comes to building my Expected Goals model for Swedish football, but I will probably bring it up again if I make any improvements and just maybe I’ll show how it’s been performing on the betting market. In my next post I’ll see how my model predicts the final table. Who will it pick as champion?