Watching the Swedish Women’s National Team beat Brazil to advance to the final in the Olympics, I suddenly realised that the shot location data I collect for Allsvenskan is available for the top women’s league Damallsvenskan as well. I then thought about Chad Murphy’s work collecting data MANUALLY for USA’s NWSL and how I should build an Expected Goals model for Damallsvenskan.

Hoping that the data was of the same quality as that for Allsvenskan, and with the code more or less already in place from my other projects, I plotted out the xG difference for each team this season: 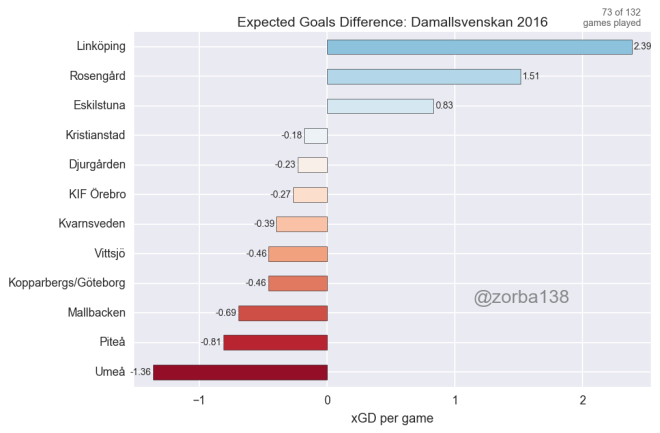 Wow, only 3 teams with positive xGD! Had I found some bug in the code or was the data faulty? Having next to no knowledge about the league I looked it up, and yeah, Damallsvenskan is very skewed towards a few top teams: 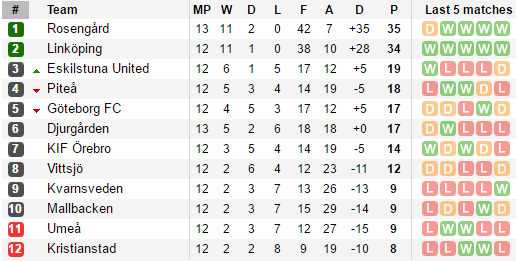 Rosengård and Linköping really dominate the league and have all but locked up the Champions League spots with their 30+ points already, while the four bottom teams all have less than 10 points. As we’ve seen above, Linköping is the really superior side when it comes to Expected Goals. 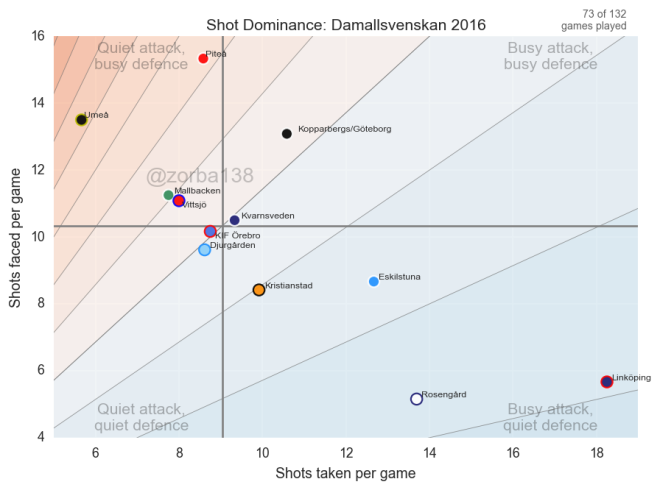 Here we see part of why Linköping have such a commanding lead in the xGD table. They take far more shots per game than anybody, and over 4 shots more than closest contestants Rosengård. The two top teams look superior when it comes to shots, but what about effectiveness? 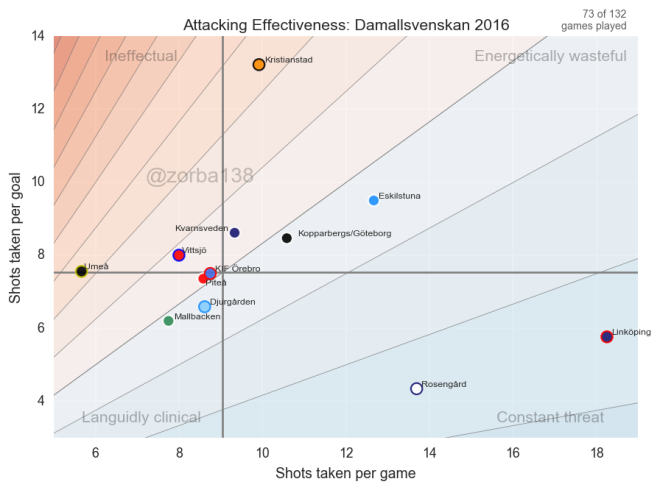 The top teams stands out here too, but this time it’s Rosengård with the superior numbers as they score on nearly every 4th shot! Kristianstad on the other hand are very ineffective with about 13 shots per goal. 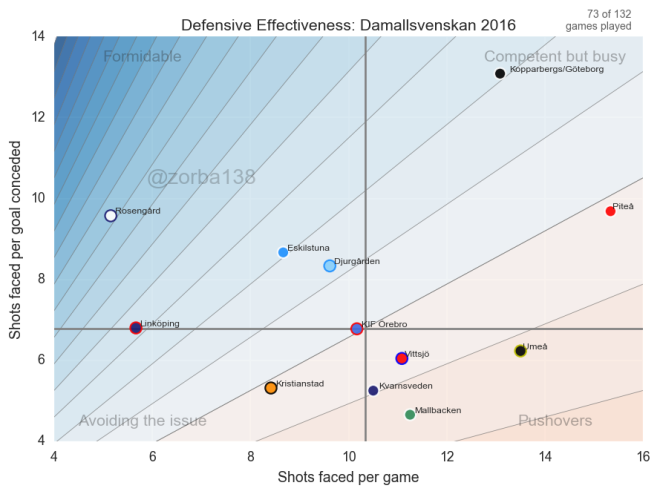 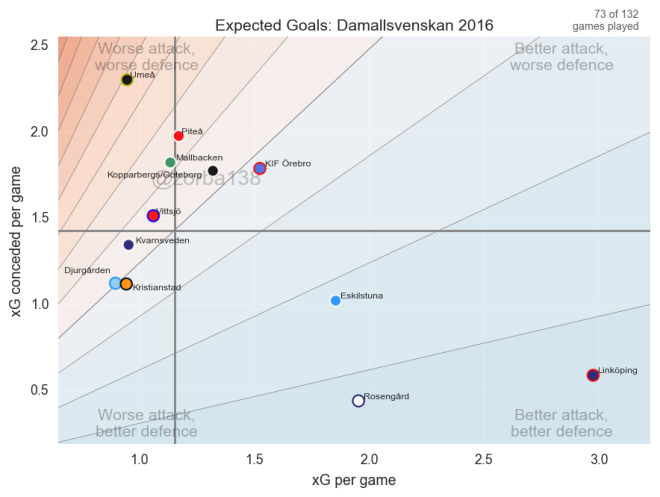 Looking at Expected Goals for and against we really see how especially Linköping dominate the league by keeping a solid defence and producing a crazy ~3 xG per game!

Ok, so that’s it about teams – what about individual players? I ran my player script and was happy to see two players I’ve heard of despite not following women’s football: Stina Blackstelius I know from the Swedish national team and Marta I know because she’s Marta. 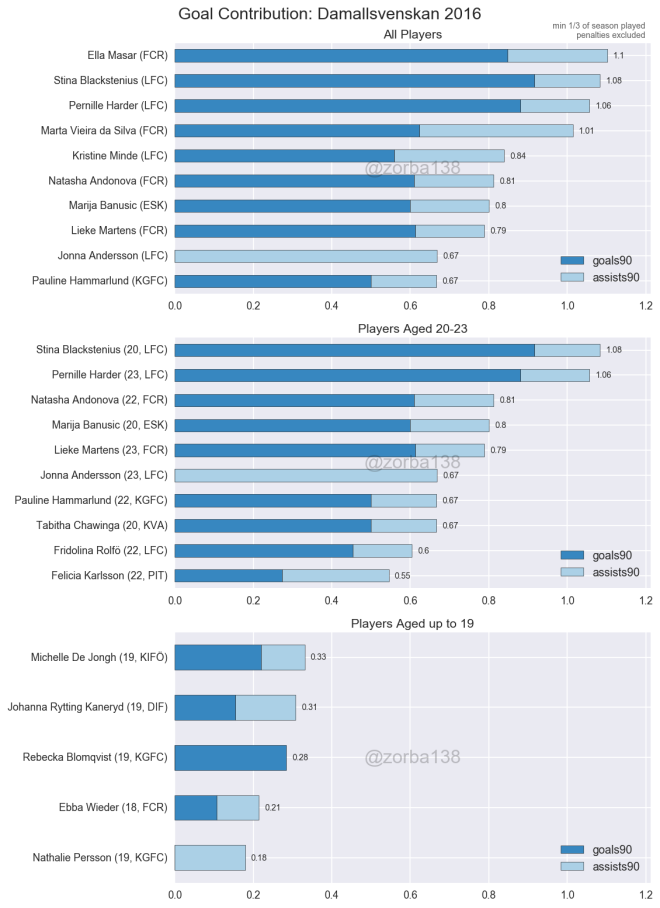 There’s a lot of players with a Goal Contribution around 1 per game, and as expected they’re mostly from the top teams. As a Djurgården supporter, I’m happy to see young Johanna Kaneryd placing second of the younger players. So what about Expected Goals? 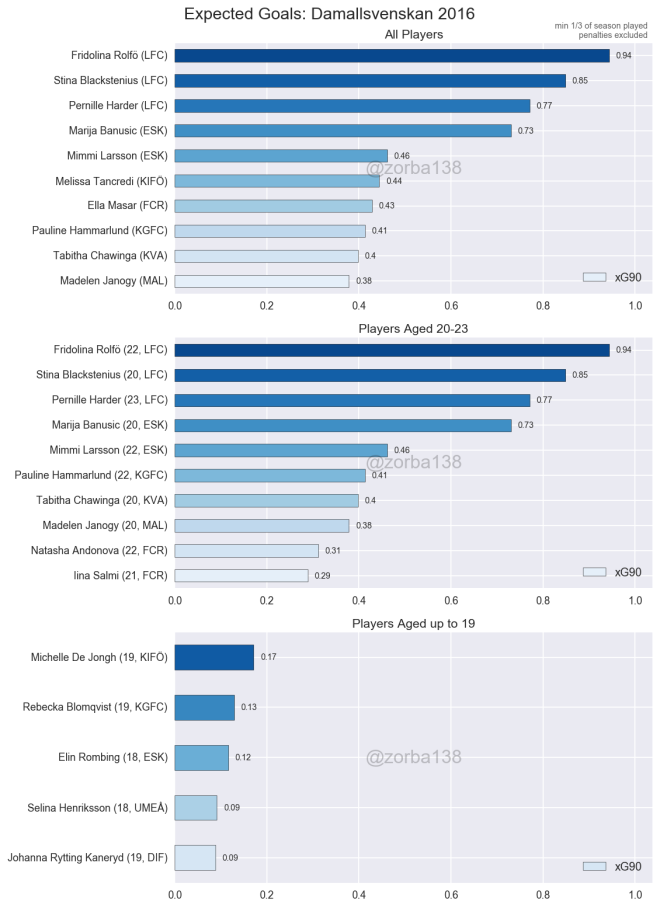 Not surprisingly, xG queens Linköping occupy the top three spots when it comes to xG per 90 mins. What is surprising though is that top contender Rosengård only have one player in the top 10, with Marta just missing out by 0.03 xG90.

What about a prediction then? As we’ve seen, the model clearly ranks Linköping highest and as they’ve got one game in hand and Rosengård left to face at home, this really shows up in the prediction with the model giving them 72% to take the title. 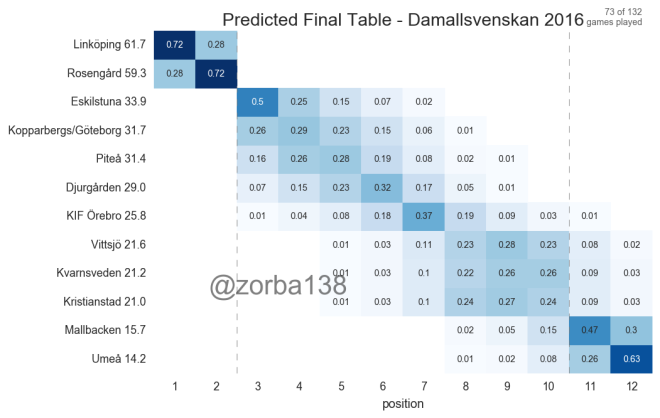 Ok, it’s time for another Allsvenskan update. With 5 rounds having been played since last time we should be able to see some changes. 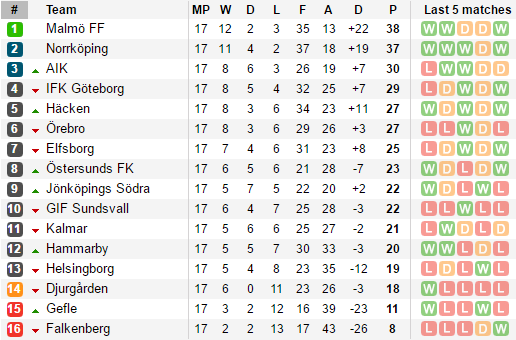 Looking at the table we see how Djurgården, Örebro and Sundsvall all have dropped a few places while Östersund and Häcken are the big winners. As a result of Djurgården’s poor performance, Pelle Olsson has been sacked and replaced by Mark Dempsey. 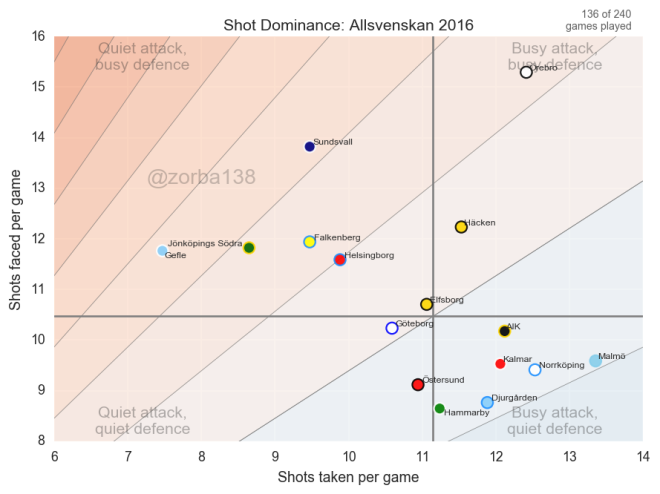 As I noted last time, the league seems to have settled when it comes to shots. Indeed, no team has changed quadrant since the last update. 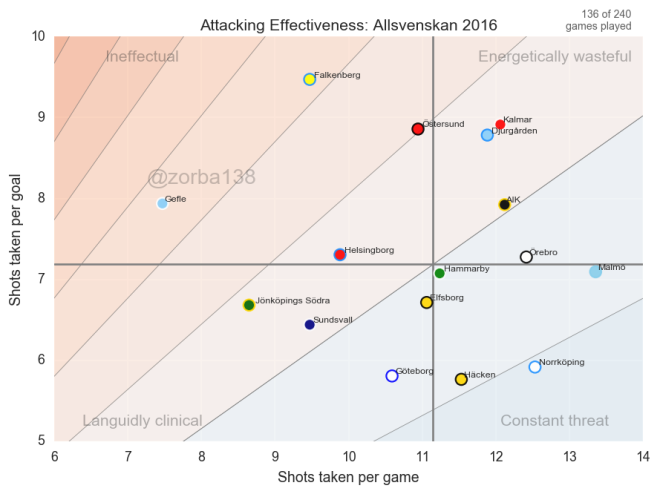 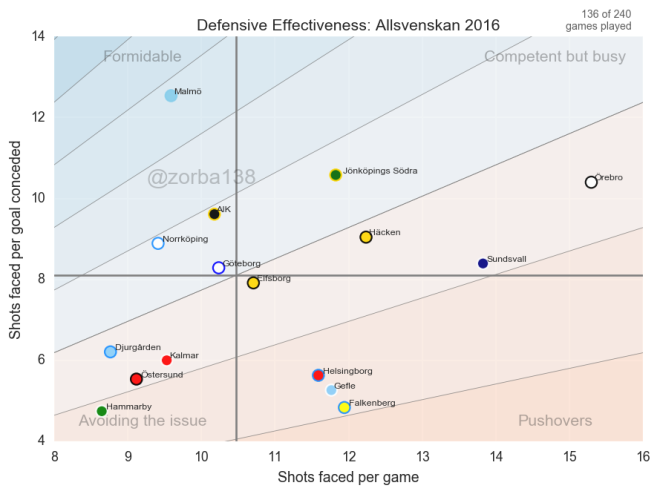 Only Elfsborg have changed defensive quadrant since last time, dropping from ‘competent but busy’ to ‘pushovers’. Hammarby and Sundsvall have also dropped a bit while Malmö have improved their defence. 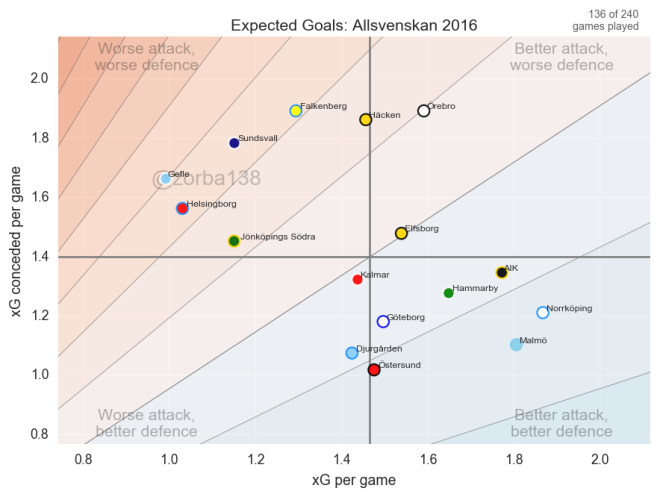 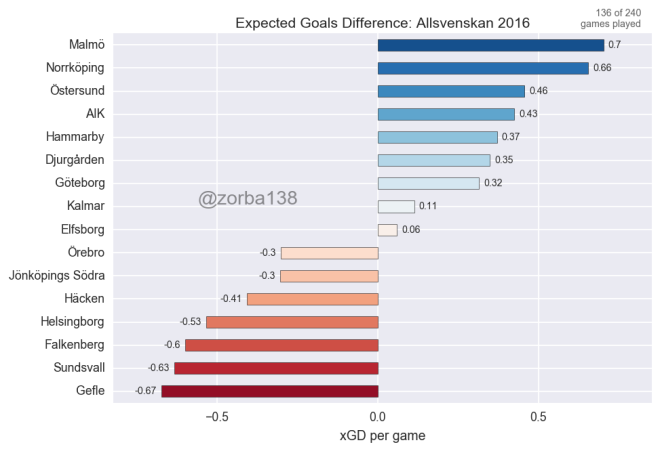 Malmö and Norrköping are still at the top of the xG-table, but the big surprise is Östersund’s rise to third place – mostly due to an improvement in their attacking output. Despite their recent struggles, Djurgården still sits in sixth place. Helsingborg have climbed up to 13th, leaving Gefle at the bottom. 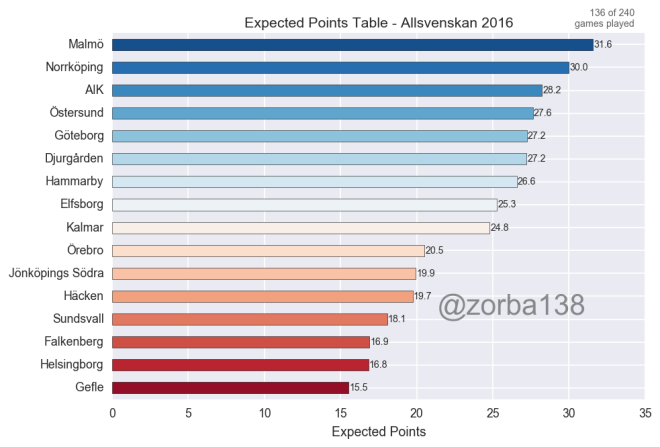 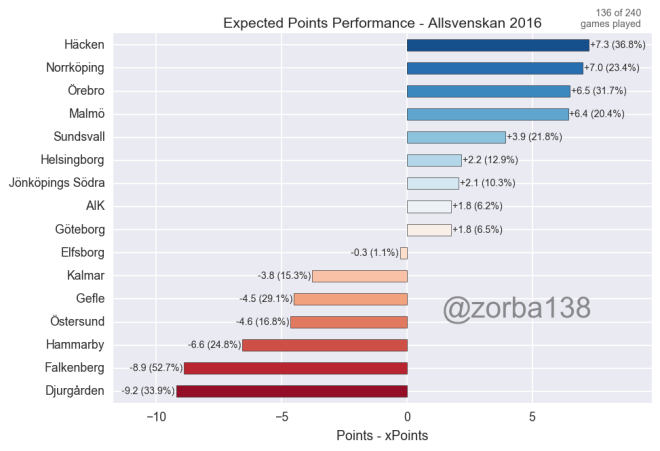 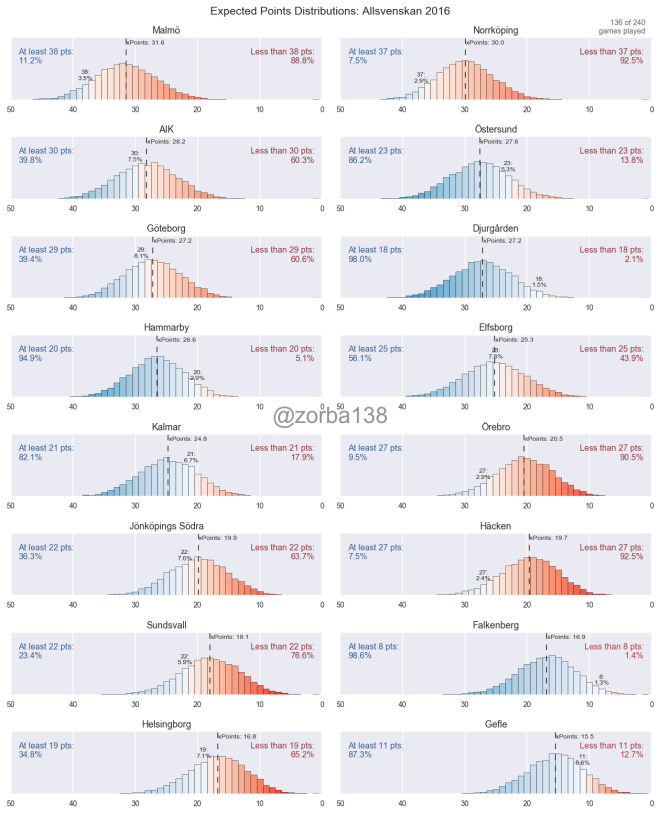 Looking at Expected Points, we can see just how bad Djurgården have performed recently. They are ranked sixth by xPoints but sit at the bottom of the xPoints Performance table, about 9 points below expectation. In my simulations, they reached at least their current total of 18 points about 98% of the time – indicating a massive underperformance. 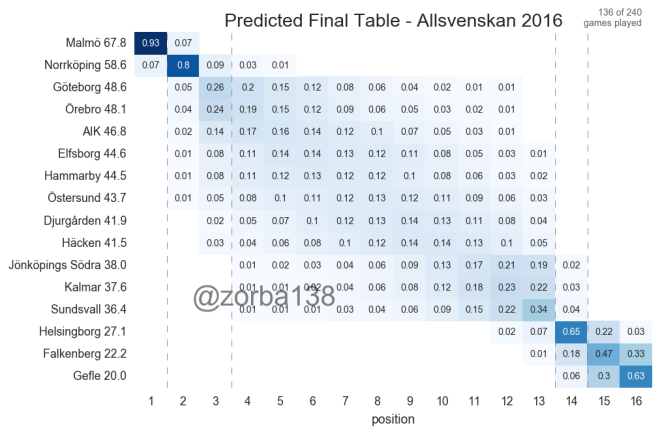 My game simulation model still consider Malmö heavy favourites for the title. I certainly agree but 93% is much too high considering they’re only 1 point ahead of Norrköping at the moment.

As a Djurgården supporter I’ve welcomed Pelle Olsson’s sacking, as DIF have been very poor under him this season. Shot dominance has decreased since last season, but more importantly, the actual goal difference and Expected Goals Difference have plummeted. The club’s situation look alarmingly similar to when Per-Mathias Høgmo came in to save us from relegation in 2013. Hopefully Høgmo’s former assistant coach can repeat that feat this autumn. 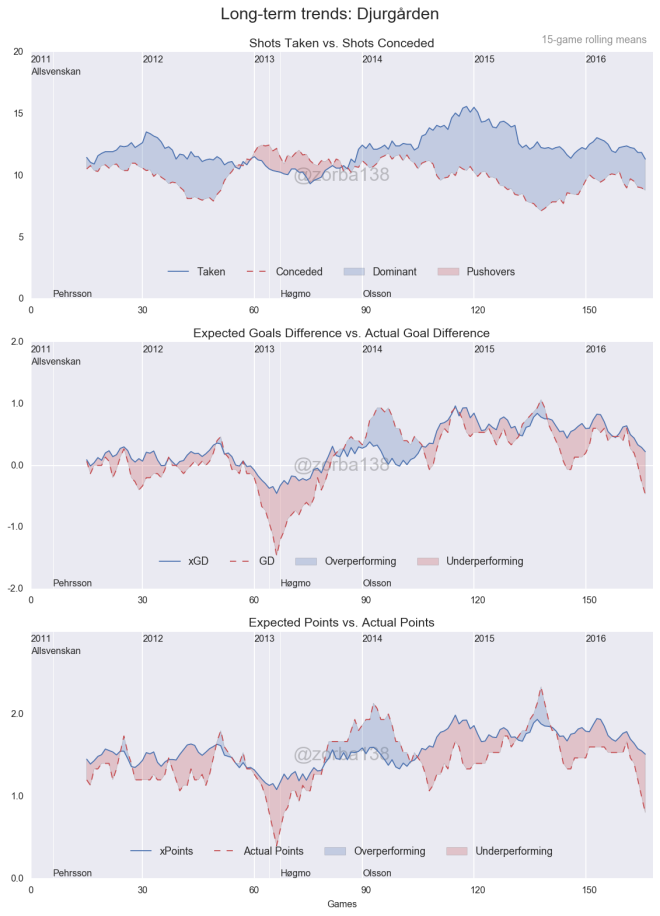 More news is that Opta data is now available for Allsvenskan. I probably won’t have time to dig too deep into it at the moment, but I’ve written a script for plotting passing networks, heavily influenced by 11tegen11 and David Sumpter.

Using these plots, we can compare Pelle Olsson’s last game using a 4-4-2 formation (Opta has it down as a weird 4-2-2-2 though) against Dempsey’s first game in charge where he used the same formation. 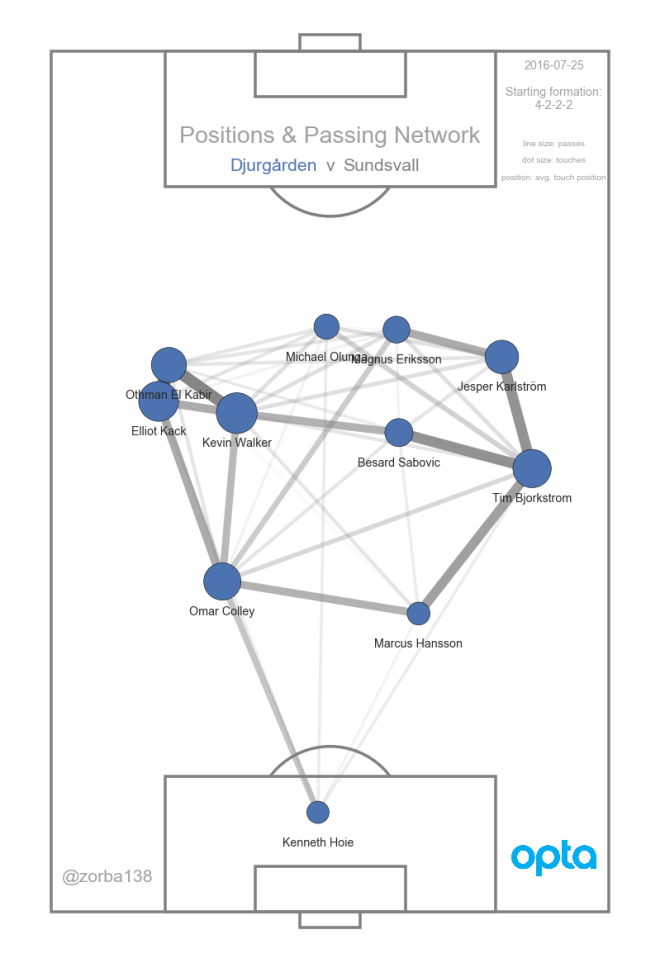 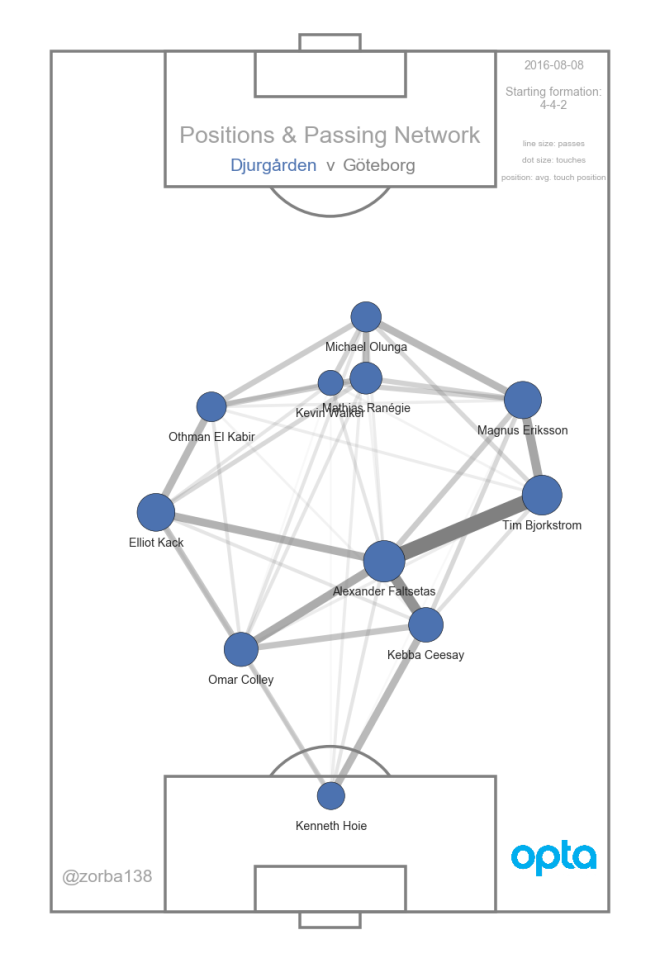 Sure, it’s only one game – but we can see some distinct differences here as Dempsey used a midfield diamond with Kevin Walker pushing up while Alexander Faltsetas dropped down deeper. Olsson has always favoured two holding central midfielders. Also, Dempsey has gone for a more straight forward approach to attacking, with more direct passes up towards the strikers, while Olsson used more crossing.