A while back I stumbled upon shot location data for Finland’s top league, Veikkausliiga. I haven’t seen an Expected Goals model for this league before so despite having no interest in or knowledge of the league, I decided to develop a model for it based on my Expected Goals model of Swedish football. My idea is that a model could be a very useful tool and make a big difference when betting these smaller, lesser-known leagues.

Unfortunately only one season of data is available and like with the Swedish data no distinction is made between shot types beside penalties. But the overall quality seems to be of a higher standard than it’s Swedish counterpart and the data also contains more detailed player metrics like number of accurate passes, fouls, turnovers, etc., which might prove useful in the future.

First off I’ve tested if the Finnish data is significantly different from that in my Swedish model. It turns out it is, but as one season of data is probably not enough to develop a decent model, I’ve opted to add the new data to my existing model and use it for Veikkausliiga. No Finnish data will be used when dealing with Swedish games however.

Let’s look at some plots of how the model rates the teams and players in Veikkausliiga:

Data from the Swedish leagues is colored red and not included in the regressions.

What we can see is that the r-squared for xG/G are worryingly lower than the Swedish model’s 0.61. Also, the model does a better job explaining team defence than attack, just like the Swedish model. Why that is I don’t know.

The model rates HJK as the best team in terms of both xG and xG against but they only finished third – albeit just two points below champions SJK, who seem to be over performing massively with their goal difference about 13 goals higher than expected. 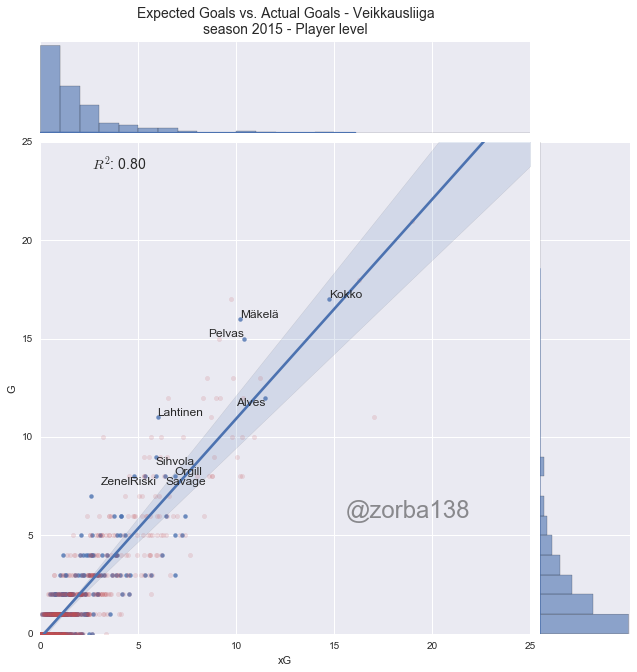 Looking at individual players, I’d say the model performs well with an r-squared of 0.8, similar to that of the Swedish model. RoPS’ Kokko had the highest xG numbers to go with his title as top scorer, and interestingly all players in the top 10 in goals outscored their xG numbers.

While the model doesn’t seem to be as good as my Swedish model, I still think it’s reasonably good considering only one season of data from the league is used. But what about its performance on the betting market?

Just like I did with Allsvenskan, I’ve simulated each game using my Monte Carlo method for game simulation. Obviously only using data available prior to each game, my method rely heavily on long-term team and player performance and my initial guess was that using it for the 2015 Veikkausliiga wouldn’t be profitable since there’s not enough data. Well, let’s see.

Running the backtest my suspicion immediately proved right, as can be seen on the above plot. The model looks like a clear loser, and setting a minimum EV when betting doesn’t seem to change that. But looking at the plot, there’s actually a point late in the season where the model start to perform better.

Since the model was at a huge disadvantage from the start with so little data (the Allsvenskan backtest used four seasons of data), I’ll allow myself to do some cherry picking. Here’s how the model performs betting Pinnacle’s odds after the international break in September: 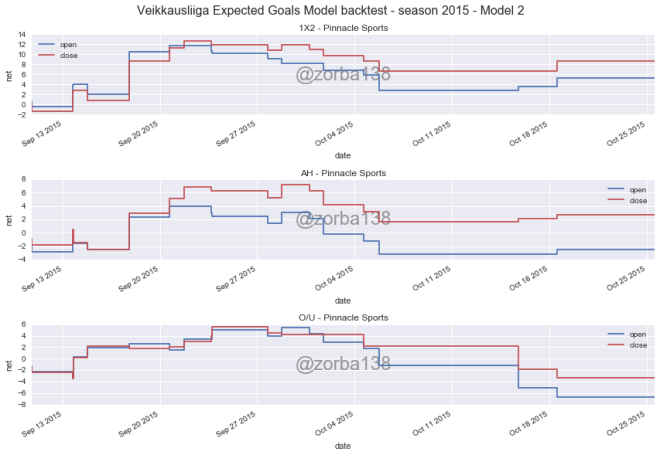 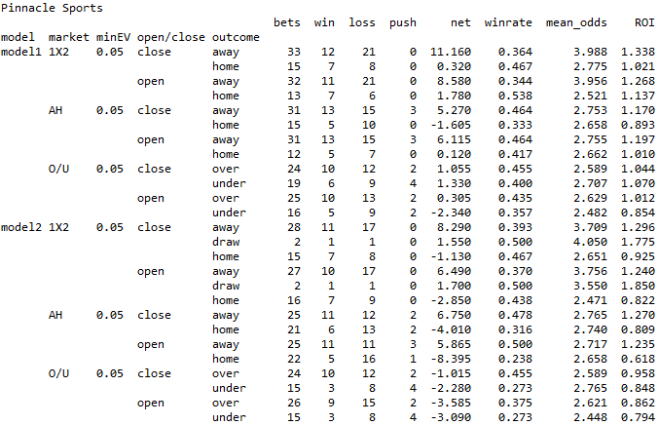 Just like before, Model 2 is just a variation of my Monte Carlo game simulation where home field advantage is weighted heavier. Like with Allsvenskan, both models seem to focus on underdogs and higher odds. What is encouraging is that this time only a minimum EV threshold of 5% is needed to single out a reasonable number of bets. In my backtesting of Allsvenskan a threshold of 50% was needed, indicating that the model probably was skewed in some way.

Like in the Allsvenskan backtesting the model makes a killing on the 1X2 market due to its ability to sniff out underdogs. There’s also some profit to be made on Asian Handicaps while only Model 1 makes a profit betting Over/Unders.

I’ve also run the backtest against Matchbook’s odds, but while I won’t bore you with more plots and tables, what I can say is that the results again match up to my findings from the Allsvenskan backtesting. At Matchbook, betting the 1X2 market is still hugely profitable, the Asian Handicaps close in on odds around even money while Over/Unders perform better, albeit only on closing odds.

As expected, betting on Veikkausliiga from the start of the season would’ve proved a dismal affair. This is understandable since my method rely so heavily on long-term performance and using only a couple of games for assessing player and team quality isn’t a good idea.

But the model did seem to perform better late in the season, and while this probably isn’t enough for me to use it for betting on the upcoming 2016 Veikkausliiga season, I’ll keep my eyes on its performance against the market and maybe jump in when it seems to be more stable.